What I Saw: Tower Heist

What I Saw: Tower Heist

Tower heist teases us with ultimate escapism: Not with time travel or alien planets, but with the hope that the little guy can beat the big guy. And make no mistake, time travel or alien planets are probably more realistic. We shouldn’t really expect Ratner, Stiller or Murphy to give us any real insight into changing our economic structures, since all three have more in common with the millionaires than the workers. I will, however, give special mention to Michael Pena who steals every scene he’s in. (Get it, he steals the scenes in a heist film. HA!)

Unfortunately, the true goal of all escapism, like bread and circuses, is social conformity. Ratner fills the screen with implausible plot twists and impossible feats for a reason. He’s telling us that economic equality is an impossibility. Which is probably true if all we do about it is occupy the movie theaters. 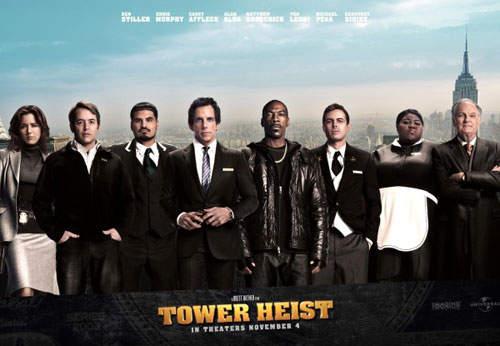 When I went to see this film, it was a sure bet to appear at the Oscars. Not as a nominee in any category, but because Brett Ratner was to be a producer, and Eddie Murphy was to be the host. Such a collaboration meant that we would likely hear at least a few references to the film during the monologues or introductions. But in the Oscar prediction game, even sure bets aren’t guaranteed. Ratner is out, and Murphy left with him. Personally, I think that Murphy should have condemned Ratner’s homophobic comments and stayed on as host. Instead, his actions suggest that he is more loyal to his homophobic frat buddy than to the Academy or his gay fans. Being an Oscar host (or almost-Oscar host) brings a certain spotlight, and he hasn’t handled this one well.

However, with Billy Crystal now announced to be the new host, we can almost guarantee that a joke or two will be made at Murphy's expense. How could Crystal possibly pass up the opportunity to point out that he was the Academy's second choice, but also the one they run to when they need someone to save the day?

What is a lamb score? Click HERE to learn more.
Read more of my reviews HERE.
As always, check the Tracker Pages in the upper right hand corner of this blog for the most updated predictions in all categories!
Posted by NeverTooEarlyMP at 11/10/2011 07:48:00 AM

Email ThisBlogThis!Share to TwitterShare to FacebookShare to Pinterest
Labels: Oscar Predictions, Tower Heist, What I Saw